In going back over the previous post, I realized I never showed you our campsite.  That’s because I didn’t take any pictures of it!  But S did and here’s what it looked like.

J and I setting up our tent

our tent is set up! 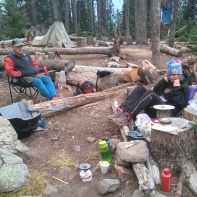 If you look closely, you can see me just sitting around in a folding chair.  Not what I usually take on a “backpack” but as the Lake of the Woods camp site was only a kilometre from the drop off point, I figured I could endure carrying the chair for 20 minutes!  So glad I did!  Gave S my normal thermarest backpack chair and J brought her favourite backpack chair so we were pretty comfy.

Oh, and I forgot to tell you about another interesting development that we discovered when we started to cook dinner the first night.  We brought my snowpeak propane backpack stove and my backpack popcan stove that uses methanol (methyl hydrate is what you purchase it as).  Before we left home, I had assiduously filled up my gas transport bottle with methanol.  At least that’s what I thought I did.  So I filled up the popcan stove and tried to light it.  It wasn’t lighting.  It never not lights!  I sniffed the container and realized I hadn’t looked at the label of the stock I had used to refill it.  It was paint thinner, not methanol, and wouldn’t light!  So that meant we had only 1 small stove for the 3 of us to make all our meals and couldn’t use a fire as there was a fire ban throughout BC because of all the wildfires!  DOH!  Well, we almost made it through but our last meal the propane tank ran out.  Note to self; be more careful next time!

Ok, it’s day 2 and we are deciding where to go.  As yesterday’s hike kind of wore us out a bit, we decided to take it easy.  J and S decided they just wanted to go back to Ladyslipper lake and hang out there, maybe go swimming.  I decided I really wanted to see Goat Lake so after a short way to Goat Lake, they headed back to the trail juncture and went back to Ladyslipper.

Good choice for me on my part.  I hadn’t been hiking alone in quite a while and it turned out to be just what I needed!  Here’s my trip to Goat lake, which failed to live up to its name as I didn’t see any goats there but filled my needs in all other aspects.

From our juncture, the trail descends into the valley that leads up to a basin where Goat lake is.  Once in the valley, it’s a nice gentle trail to the lake.  Easy walking 🙂

From the map I knew that the lake would be surrounded by a bunch of peaks and nestled into a basin.  Every now and then, I would get a glimpse of where I was ultimately headed.

And you can now begin to see some of the devastation caused by the bark beetle.  Most of the large spruce etc are dead.  Fortunately, there are young trees springing up to replace them so in another 30 years or so, if they survive, it won’t look quite so desolate.  You can also see the continuing effects the smoke was having on the views.  Normally would have been clear blue sky with high definition on the mountains given the lens I was using. 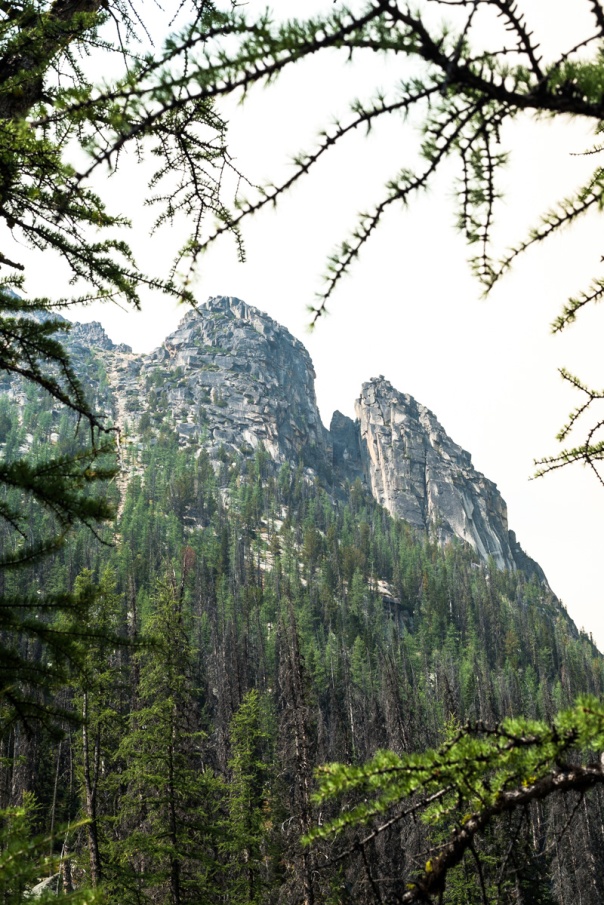 Here’s a lovely boggy meadow filled with a sedge called narrow-leaved cotton grass and then a closeup of the actual cotton grass plant.

Getting a bit closer to the lake now.

And, tada! Finally made it to the lake.

It was a warm lovely day except for the smoke so I walked around to the other end of the lake and found a great spot from which to view both the surrounding mountains and the lake while I ate my lunch and drank my tea.  Nice breeze to keep the bugs away, too. Happy camper I am.

So…. Goat lake is just a nice little lake.  Nothing special about it except for where it is and the peaks that surround it.  There were 2 other young folks there and they left before I did so I had the place all to myself for quite a nice bit of time.

I just love the rock that these mountains are composed of.  It’s quite dramatic looking and it looks like it would be really fun to scramble up and climb if you were so inclined. Of course, much steeper than it looks in the photos!

After relaxing and taking a few more pictures, it’s time to head back.  A parting shot of the lake on my way back out. 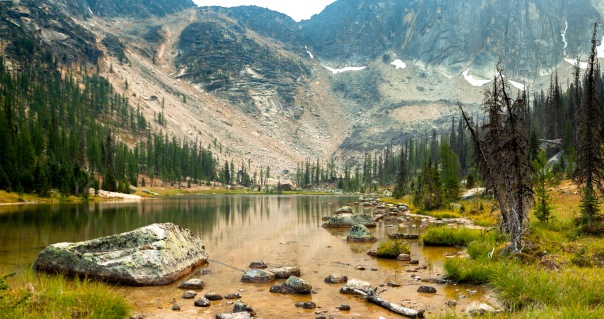 Took a few more photos of flowers and such.

Made it back to camp and joined up with J and S.  Sponged off my sweat in Lake of the Woods, ate dinner and relaxed.  Watched stars, fell asleep.

We had originally planned to leave on the 3:30 shuttle down so after a lazy breakfast we packed up camp and figured we could just leave our gear at the lodge and go for a day hike, returning just a bit before heading out.

Nope.  As I mentioned in the previous post, due to the smoke coming into the park, BC Parks declared an evacuation of Cathedral Lakes Park.  So we pared down our hike to a short jaunt over to Scout Lake which was just a km or so from the lodge and hoped we could get out on the 1 pm shuttle.  No sense hanging around for more smoke!

Turned out to be a good plan.  Wandered over to Scout lake and enjoyed ourselves and saw another of the lakes.  Here’s a few pics.

I walked all the way around while J and S just stayed on one side.  Here’s a nice sedge that I saw at the lake.

And a nice batch of Arnica next to a rock.

On the way out I went a little way past the lake to see the creek coming out of it and got a really nice shot. 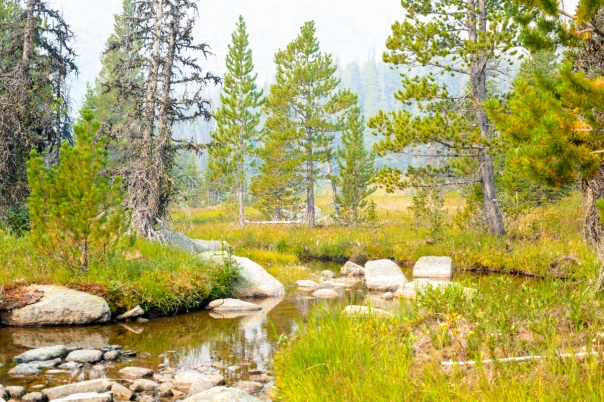 Back to the lodge and it turns out that they decided to try to evacuate everyone on the 1pm shuttle.  So they had 3 or 4 trucks going back down to the highway.  Uneventful ride, back to the car and then back home.

So that’s our trip to Cathedral Lakes Provincial Park.  Maybe we’ll go back when there isn’t any smoke and see all the wonderful views we were supposed to see originally.  But there are just so many wonderful places to visit, that maybe we won’t.  Only time will tell.

Hope you enjoyed seeing a bit of this wonderful park.  We sure did!

Until next time, keep on rambling. 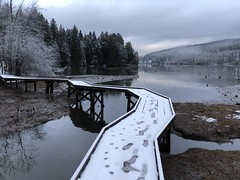 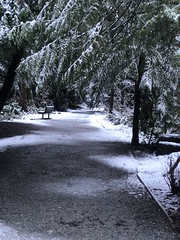